I am a fan of Jeff Greenfield, although our political persuasions are probably miles apart.  He is a wonderful writer and is as measured as one could hope for when it comes to American politics.  Thus, I commend this article to any reader.

As I watch the mental midgets—especially Senators Schumer, Whitehouse, Blumenthal, and Franken, I am particularly drawn to this quotation:  “And the process is made worse by the uncertain grasp that many of the senators, on both sides of the aisle, have about the subtleties of constitutional law. (I am waiting for the day when an exasperated nominee challenges members of the committee to ask a question without reading from the talking points prepared by their staffs; in many cases, the silence would be deafening.)”

Senator Schumer’s resort to innuendo and New York smear tactics is particularly reprehensible.  Senator Whitehouse is merely a “no load.”  (A term from electrical engineering with respect to motors and electrical circuits: it means that nothing is connected to the shaft and it is not doing any useful work,”  a perfect definition of the Senator.)  Senator Franken is perhaps the most qualified Democrat in the Senate; he is a stand-up comedian!

Judge Gorsuch is eminently qualified to sit on the United States Supreme Court, as were, inter alia, Judges Robert Bork and Merrick Garland.  In regard to Judge Garland, on 24 March 2016, I wrote this.

Of course the Democrats are unhappy that President H. Clinton did not get to appoint the next Associate Justice of the Supreme Court. Of course they are unhappy that the Constitution does not have a provision with respect to advice and consent that is similar to Article I, §7, cl 2.  (“If any Bill shall not be returned by the President within ten days (Sundays excepted) after it shall have been presented to him, the Same shall be a Law, in like Manner as if he had signed it, unless Congress by their adjournment prevent its Return, in which Case it shall not be a Law.”)

The miracle is that any honorable man or woman would subject himself or herself to the scurrilous examination of the likes of Al Franken in order to serve our Nation.  The blessing is that, in spite of the unbelievable political history of the last nine years, we have the prospect of yet another honorable member of the Supreme Court, lack-weights such as Senators Schumer, Whitehouse, Franken, and Blumenthal notwithstanding.

A couple of nights ago, President Obama gave his “farewell address”, not from the Oval Office as has been the “tradition” since 1960 (President Eisenhower), but from the McCormick Center in Chicago, before a picked band of rabid, die-hard supporters.  In so doing, he once again proved my thesis that he knows how to campaign for office, but never figured out how to be President.  He needs and feeds off of adoring crowds, and will go anywhere, at any cost, to do what other Presidents were able to do from their desks.

Yesterday, Senator Cory Booker, broke with Senate tradition to “testify” at the confirmation hearings for Attorney General-designate Jeff Sessions.  By all accounts, he did so for the TV time.  His so-called “evidence” against Senator Sessions was some dredged up, dusted off allegations from 31 years ago which have been discredited.  All Senator Booker really did was to wrap himself in the King family mantle.

The 2020 campaign began yesterday, and you can bet that Senator Booker plans on being in the thick of it.  We will see if the Democrat Party falls for the trap of nominating yet another ultra-liberal, north-eastern Senator, or if it leaves the howling proponents of special interest and race-conscious politics and concentrates on all Americans.
Posted by Mac at 1/12/2017 07:42:00 AM 1 comment:

DON'T GIVE UP THE SHIP (Conclusion) 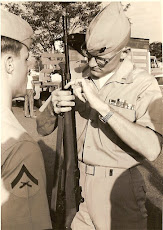 Mac
Downingtown, PA, United States
I am, first and foremost, a child of God, saved by His Grace through His Son, Jesus. I am father of 8, including my four little Angels who are waiting with the Master who loves the little children) , and grandfather of the two smartest and most photogenic grandchildren in the world. And to quote Lee Marvin, "once, by God, I was a Marine." I am an admirer of all sorts of fire arms. I consider the Second Amendment to be the guarantor of all of our other constitutional rights. I think there ought to be a Constitutional Amendment outlawing the Designated Hitter and the insane practice of awarding World Series home field advantage to the league that won the All-Star Game. I am kept safe and well-shepherded by Ava T. Dog.